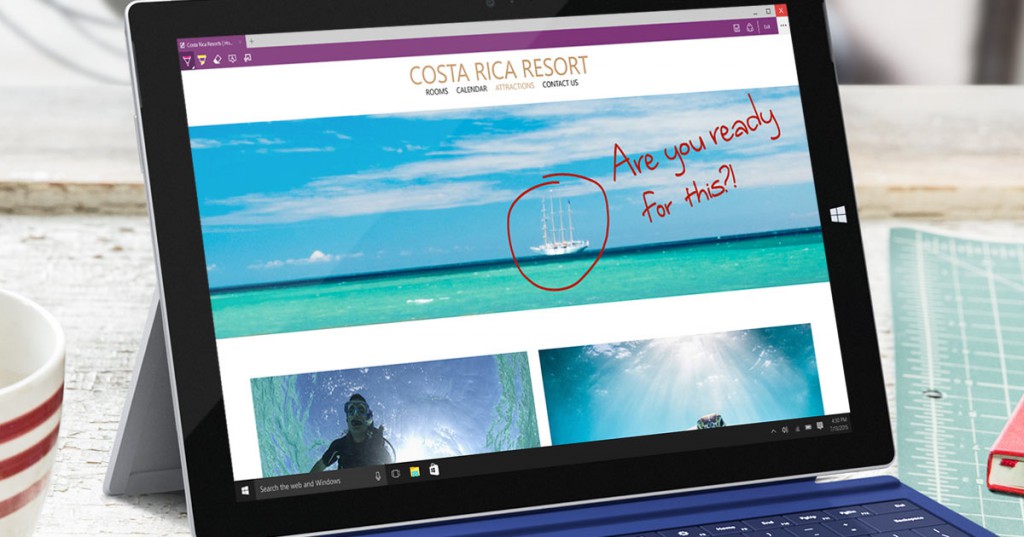 Are you Ready for Microsoft Edge?

Alongside Windows 10’s release, Microsoft has introduced a new browser which they have dubbed Edge, and they’re making it the default.  Internet Explorer 11 can still be used in Windows 10, but Microsoft has indicated that they will only be supporting it in the future with security fixes, and it’s being kept around mostly to support corporate customers and older/intranet websites.  For most users, Edge will be the browser that Microsoft will want them to use.  With Edge, Microsoft has decided to start over from scratch instead of trying to continue building on top of Internet Explorer and all of its legacy features and code which were holding them back.  So what’s new with Edge?

Internet Explorer 10 lagged behind all of its competitors in most every speed metric there was for browser performance.  With Edge, Microsoft has finally caught up, at least for the moment.  See Anandtech’s test results here:

Microsoft has also gone back to the drawing board with their user interfaces, and come up with a look that mimics the minimalist look of Google Chrome.  Nothing extraneous; a back button, a forward button, a refresh button, a home button, and an address bar.  To the right are three additional icons:  A Share button for social media integration, a Web Notes button which allows you to add annotations and notes to the web page then save it or share it with others, a favourites button, and a settings button.  There’s also a Read mode, which tries to strip out extraneuous advertisements and clutter from pages in order to make for a better experience reading articles and the like.

Cortana can be thought of as Microsoft’s equivalent to Siri found on Apple I-Devices.  It’s powered by Microsoft’s Bing search engine, and fully integrated into Windows 10.  In Edge, it also tries to help out whenever you type into its address bar, similar to what Google does with Chrome’s address bar: if you type in a question about the weather, Edge might show you local weather reports, and if you type in a stock symbol, it’ll show you its current price.

Is it Better Than Internet Explorer?

It’s definitely much faster than Internet Explorer 11 was, and it integrates many of the features that its other competitors have introduced.  If you like sticking with Microsoft browsers, then certainly you should try it out when you get Windows 10.  There might be some older websites which won’t play well with Edge, because with their new browser, Microsoft has stopped supported some less secure older technologies, including ActiveX. For those older websites, you can always fall back to IE.  Also keep in mind there is no extension support yet in Edge.

Is it Better Than Chrome or Firefox?

Performance wise, they’re all on a level playing field at the moment.  If you’ve already fallen in love with one of those browsers, and are using features such as Google’s browser syncing or any extensions or plugins, there isn’t that much of a reason to switch back to Microsoft.  At the moment, there is no extension support for Edge, so if you are using a bunch of extensions already in those browsers, then keep that in mind.